The member representing Nnewi South One Constituency in the Anambra State House of Assembly, Honourable Sony Ozobialu has donated five million naira cash to Unubi Development Union for the drilling of borehole facility at Unubi Civic Centre to tackle the problem of water scarcity in the area.

House of Assembly Correspondent Chukwuemeka Modilim  reports that according to Honourable Ozobialu, the five million naira covers the borehole and sundry expenses for the project. 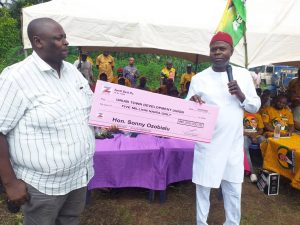 He thanked Governor Willie Obiano for providing constituency project funds that enabled him to touch the lives of his constituents.

In his remark, the President General, Unubi Development Union, Mr. Cosmas Abanobi, while thanking Honourable Ozobialu for the gesture described it as their visible share of democracy dividends and assured its security.

On his part, the Transition Committee Chairman, Nnewi South Local Government Area, Mr. Chieloka Okoye announced that the people of Nnewi South One Constituency made a right choice in Honourable Ozobialu as he is living up to expectations.

The Senior Special Assistant to the governor on Political Matters, Barrister Kingsley Umenwa commended the lawmaker for chosen to live a life of accountability, probity and honesty.