Members of the All Progressives Grand Alliance, APGA, in Ward Four, Uzom Urunnebo Enugwu-Ukwu, Njikoka Local Government Area have expressed support for the party’s leadership and candidacy of Professor Chukwuma Soludo as the party’s standard bearer in the November six governorship election in Anambra State.

The members, who stated this during a meeting of executive and stakeholders from the ward, held at the village hall said that events arising from divisive plots to compromise APGA’s unity and popularity ahead of November election have made it necessary for them to reason together. 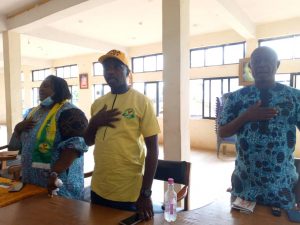 Correspondent Daniel Ezeigwe reports that the running mate to Professor Soludo, Dr. Onyekachukwu Ibezim, while addressing the members, urged them not to lose focus or be daunted by the current temporary hitches, noting that what is most important is a strong united APGA that can outrun other parties in the election.

Dr. Ibezim also proposed council of elders for political wards in the state, to act as promoters of peace, and pledged support to grassroots party units.

In her speech, the Commissioner for Youths and Creative Economy, Professor Theresa Obiekezie, who is from the ward said that Enugwu-Ukwu remains one of the biggest beneficiaries of Governor Obiano’s goodwill, urging stakeholders to rise up to their roles in carrying other members of the party along. 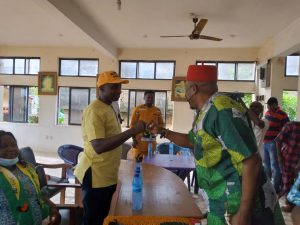 Also speaking, one of the conveners of the meeting and Deputy Chief Press Secretary to the Governor, Mr. Emeka Ozumba said that the forum was to enlighten party members on current events in the party, for them to be able to separate rumours from facts, adding that Governor Obiano’s developmental preach to the town singles APGA  out as the ideal voice of the masses.

Mr. Ozumba also urged members of the party to avail themselves of the ongoing voter registration exercise and get registered for the November poll.

On his part, the chairman of APGA in Njikoka Local Government Area, Elder Charles Ukekwe, said that though Professor Soludo presents the strongest antecedents among all the candidates vying for the Anambra top seat, party members across the state must rally round in full force to ensure that November sixth votes replicate APGA and Soludo’s popularity.

APGA members from the ward as well as executive council members from all the wards in Njikoka local government area attended the meeting.