Correspondent, Emmanuel Okonkwo reports that the Federal Government’s household uplifting programme is an initiative of the President Muhammadu Buhari administration aimed at lifting millions of indigent Nigerians out of poverty by paying them five thousand naira stipend on monthly basis, to enable them build up various petty businesses.

This month’s story was different as the beneficiaries were paid the sum of thirty thousand naira each at a stretch, covering their last year’s July, August, September, October, November, and December stipends, which were not paid. 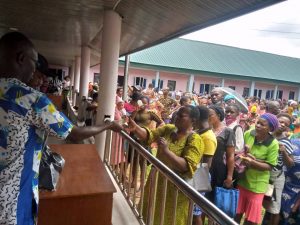 During the disbursement of the stipend, payment providers of the National Cash Transfer Office were seen using electronic devices to identify each of the beneficiaries before payment, to ensure that the money is given to the right and deserved persons.

Speaking to Journalists shortly after the flag off of the programme at Ihiala Local Government Headquarters, the Head, Anambra State Cash Transfer Unit, Mr. Ralph Enukorah, who explained that the benefiting Local Government Areas were selected based on poverty index ratio of the World Bank, as the programme is meant for the poorest of the poor across Nigeria, encouraged the beneficiaries to use the money given to them to exit poverty level as targeted by the Federal Government.

Mr. Enukorah disclosed that apart from the poorest Local Government Areas in Anambra, including Orumba South, Ihiala, Awka North, Dunukofia, Ayamelum, and Anambra West, which were earlier selected, the programme has been extended to additional five Local Government Areas, including Awka South, Ogbaru, Onitsha South, Oyi, and Anambra East, which will soon start receiving their stipends as the arrangement has been concluded. 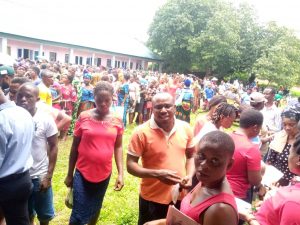 On his part, an official from the Abuja Cash Transfer Office, who is in charge of the disbursement, Mr. Uchenna Ozuzu, expressed satisfaction with how the disbursement exercise is being done in Anambra State, confirming that the money is being given to the right individuals who are really battling with poverty.

In their various remarks, some of the beneficiaries, including Mrs. Stella Okoli, Anthonia Obasi, and Apolonia Nwigwe, all from Ihiala, and their Dunukofia counterparts, Mrs. Elizabeth Anaekwe and Grace Aduaka, thanked the Federal Government for remembering them, saying that the money will enabled them startup businesses and also venture into agriculture to support their families.