Civil servants in Ogun stormed a branch of Unity Bank Plc led by embattled Tomi Somefun in Abeokuta on Monday to protest the alleged diversion of their N134 million investment fund.
The aggrieved customers also lambasted the Managing Director, Somefun, over the dubious and fraudulent activities of the bank which she has not been able to tackle. 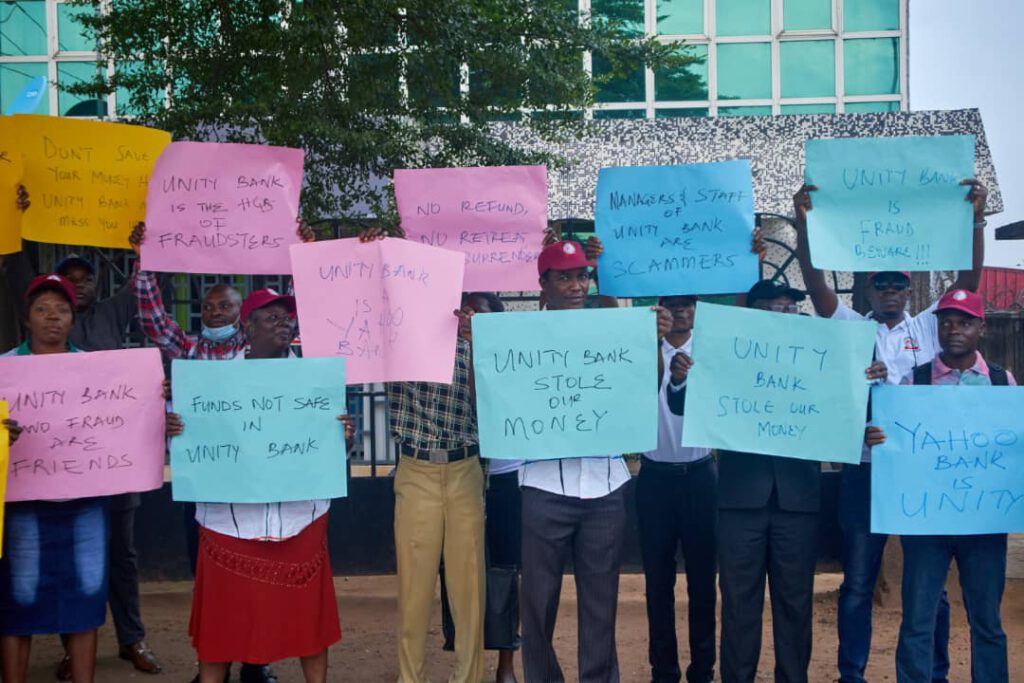 The workers, under aegis of the Association of Senior Civil Servants of Nigeria, Ogun State on  marched to the Ita-Eko branch of Unity Bank to make known their complaints.
With placards in their hands, the aggrieved senior civil servants said: “Funds Not Safe In Unity Bank,” “Unity Bank Stole Our Money”, “No Refund, No Retreat, No Surrender.”
Speaking on behalf of the association, the State Chairman, Comrade Olude Isa Owolabi, members had instructed the bank to transfer their investments into another bank account, saying however, that sent a lesser amount of what it was told to move into another account. 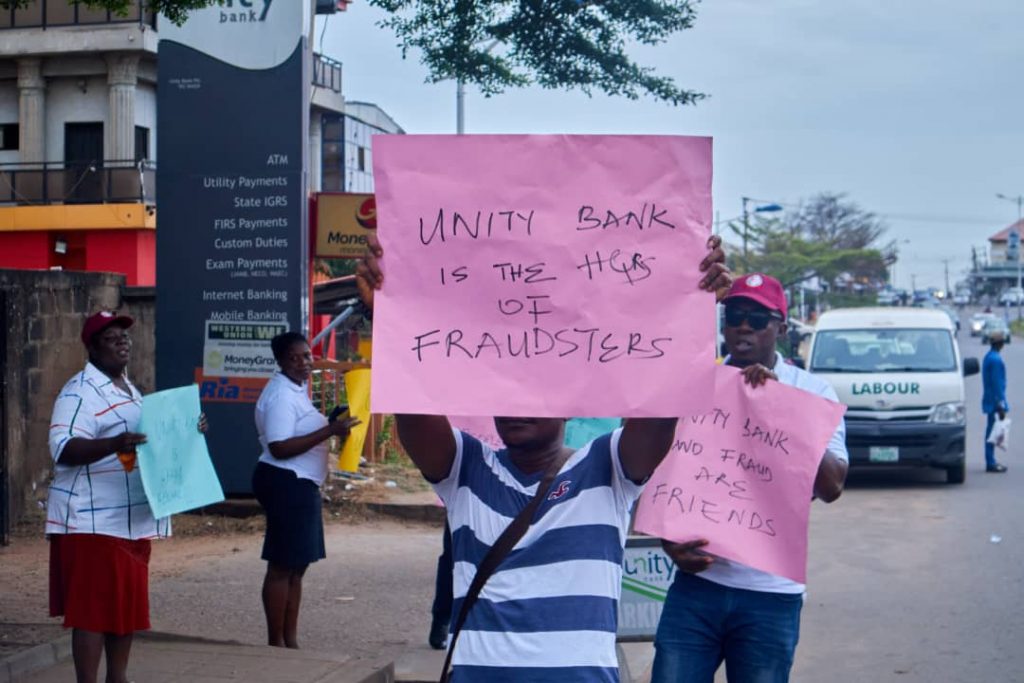 “Sometimes last year, we got an emergency call that Unity Bank, Abeokuta branch is defrauding customers and because we are a union that is proactive, we rose to the occasion and instructed Unity bank to transfer some amount of money from our Investment account to another account.
“Unfortunately, Unity Bank transfered lesser the amount we were expecting and we had a shortage of significant amount from our account.
“We have interacted with them many times, we have contacted them, we have written several letters, not less than six or seven and Unity bank did not respond.
“The Bank MD should be queried over the fraud. 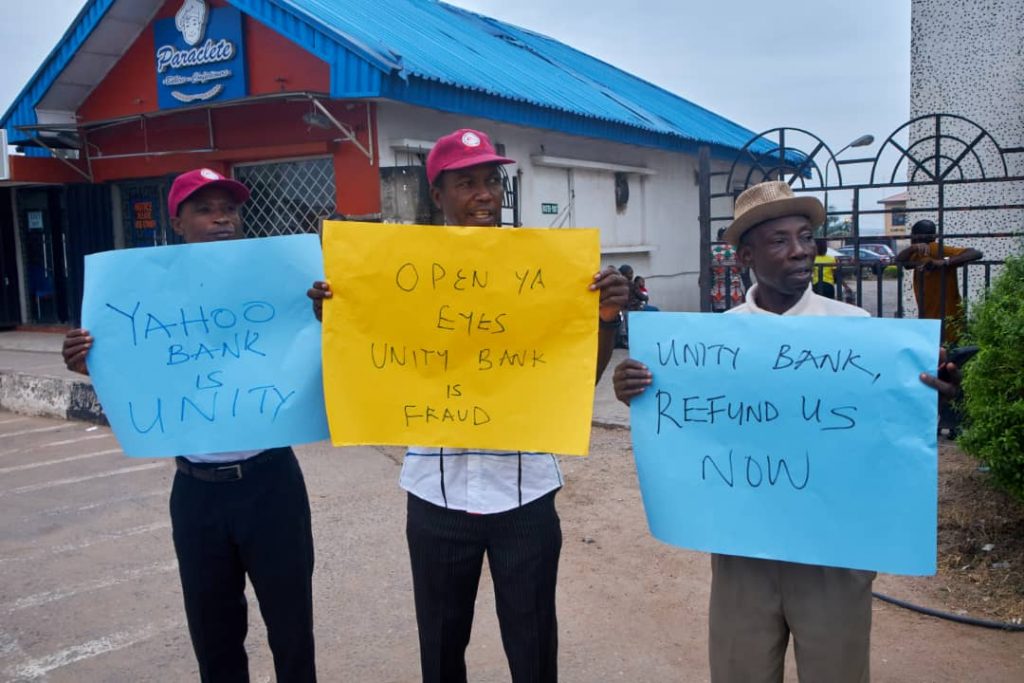 “The issue started as early as February this year and as we speak, they have not returned our money to us. We cannot continue to wait for Unity bank to be free. They have admitted that they have defrauded us. Records are there to show that in our office. They admitted that the money is there and they will transfer as soon as possible. Since then, we have not heard anything from Unity bank,” he stated.
According to Owolabi, the association’s investments fund was N134million, while a sum of N80million had been transferred to the association, leaving a balance of about N54million.
Reacting, an official of the bank, who did not want to be mentioned because he was not authorized to speak on the matter, said the bank has never denied the association access to their money.
He informed that “the issue is already with the Central Bank of Nigeria (CBN).” 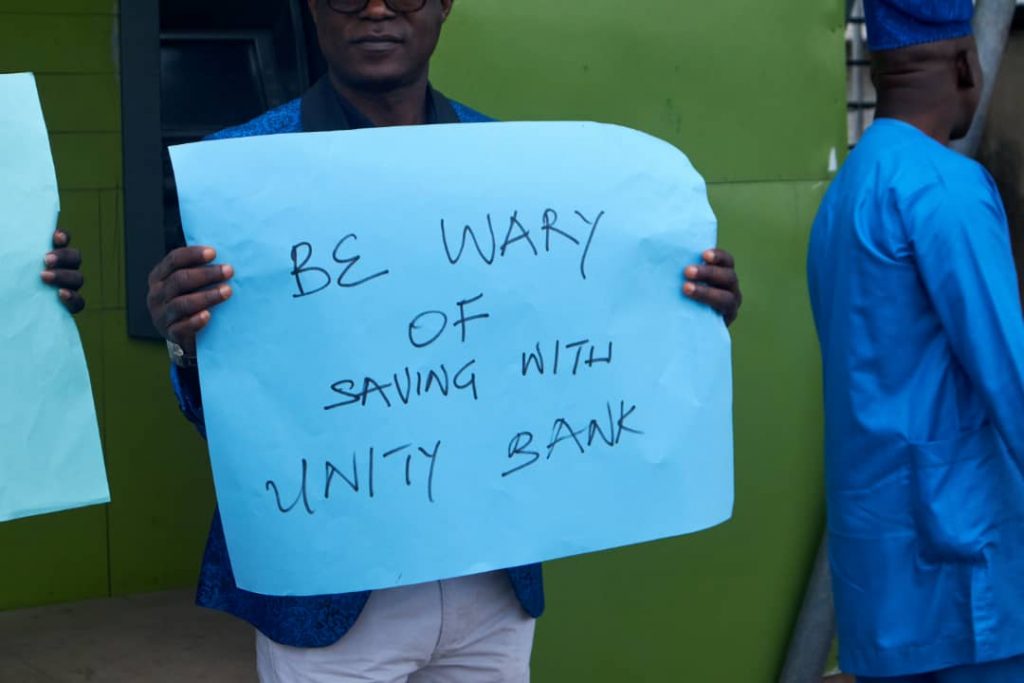 The official added that until the CBN concludes investigations on the matter, the bank cannot make any further transfer as requested by the association.
Source: Dailyrecords.
Share