Ahead of next Month’s governorship election in Anambra State, the Chairman Board of Trustees of the All Progressives Grand Alliance APGA Governor Willie Obiano has tasked members on delivering its candidate Professor Chukwuma Soludo.

Governor Obiano gave the charge at a meeting with the party executives, at the Governor’s Lodge, Amawbia. 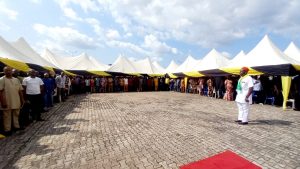 Government House Correspondent, Ejike Abana was there and reports that Governor Obiano who appreciated APGA members for the support given to him throughout his tenure, stressed that the race is not an individual one but a party affair.

He assured that he will fulfill the promises he made to the party before his tenure elapse calling for all hands to be on deck.

For her part, the wife of the Governor, Dr. Ebelechukwu Obiano expressed confidence in the ability of APGA foot soldiers at the grassroot, emphasizing that the next Month’s election is a defining moment in the life of Ndi Anambra, calling for unity of purpose in the journey.

The Governor’s wife pointed out that the party leadership is interested in someone who will consolidate on what the Governor has achieved and advised them to embark on massive mobilization for Professor Chukwuma Soludo.

On his part, the APGA governorship candidate in the next Month’s election, Professor Soludo maintained that the grassroot belong to APGA, asking the party executives to get prepared as the Campaign may go beyond the usual to house to house mobilization. 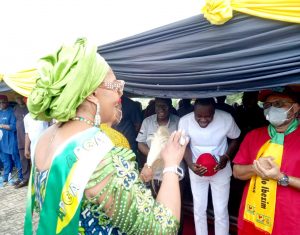 Among those present at the meeting were State Executive Council members, House of Assembly members, the APGA Deputy Governorship candidate, Dr. Onyekachukwu Ibezim, among others.