The National Drug Law Enforcement Agency, NDLEA, has arrested a suspected fake soldier, Hayatu Galadima and his accomplice, Hamisu Adamu when they are transporting ammunition and communication equipment to bandits in Kaduna. 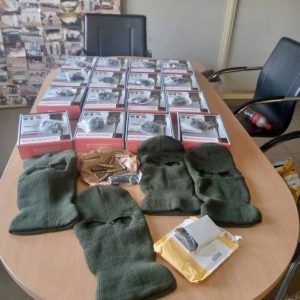 Also recovered from the duo were three MTN sim cards, two 9mobile and one airtel sim cards packs, one iPhone twelve pro, one Samsung A31 and one Nokia phones, others are seven Nigeria Army pass letters, five handbags and one bagco bag containing personal belongings, as well as a gallon of palm oil.

Hayatu Galadima claimed to be a Lance Corporal serving in Ibadan, and said that they were taking the exhibits to Kaduna and Kano. 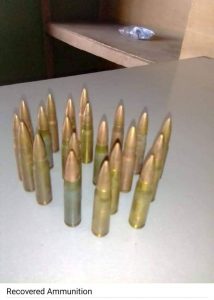 Preliminary investigation however indicates that the suspects may have contact with bandits in the North West and were possibly moving the ammunition and the two-way radios to bandits who are presently excommunicated due to the suspension of telecommunications services in Zamfara, Sokoto and Kaduna states.

The Chairman and Chief Executive Officer of the NDLEA, retired Brigadier Mohamed Buba Marwa, has directed the Federal Capital Territory Command of the Agency, which made the arrest to transfer the suspects to authorities of the Nigerian Army and another intelligence agency, which had earlier placed the two men on its watch list for further investigation.